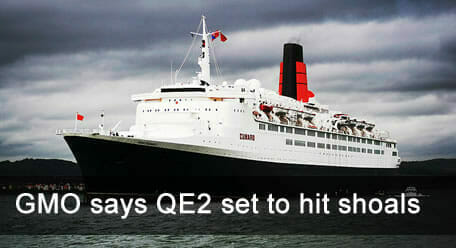 On the eve of an anticipated second round of quantitative easing – QE2 – a number of commentators, including GMO’s Jeremy Grantham, have criticised Fed’s policy as a large net negative to the production of a healthy, stable economy.

According to Grantham, chief investment strategist and co-founder of GMO, in almost every respect, adhering to a policy of low rates, employing quantitative easing, deliberately stimulating asset prices, ignoring the consequences of bubbles breaking, and displaying a complete refusal to learn from experience has left Fed policy as a large net negative to the production of a healthy, stable economy with strong employment.

He believes that there is likely to be no benefit to artificially low rates, and more so, quantitative easing is likely to turn out to be an even more desperate move than the typical low rate policy. Importantly, by increasing inflation fears, this easing has sent the dollar down and commodity prices up, he says in his quarterly letter.

Weakening the dollar and being seen as certain to do that increases the chances of currency friction, which could spiral out of control.

“If I were a benevolent dictator, I would strip the Fed of its obligation to worry about the economy and ask it to limit its meddling to attempting to manage inflation.

“Better yet, I would limit its activities to making sure that the economy had a suitable amount of liquidity to function normally.

“Further, I would force it to swear off manipulating asset prices through artificially low rates and asymmetric promises of help in tough times – the Greenspan/Bernanke put.

It would be a better, simpler, and less dangerous world, although one much less exciting for us students of bubbles. Only by hammering away at its giant past mistakes as well as its dangerous current policy can we hope to generate enough awareness by 2014: Bernanke’s next scheduled reappointment hearing.”

In recommendations, Grantham says investors should:

Emphasise US quality companies, which are still cheap in an overpriced world

For the very long term (20 years) overweight resources, particularly if they have a sharp decline (this is Grantham’s personal view rather than that of GMO, which on this topic is agnostic).