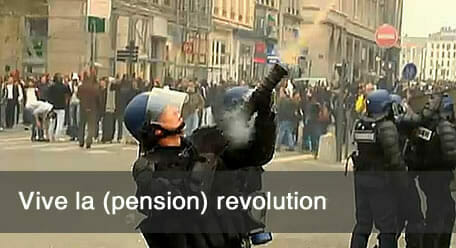 France’s penchant for social demonstration targeted pension reform this week, with more than one million people striking over proposals to increase the retirement age from 60 to 62. The scenes could act as a warning to other countries with similar pension shortfalls.

In the sixth day of strikes over the pension reform, it is reported that one-third of flights into Paris have been cancelled, and more than 2,500 petrol stations are dry of fuel.

President Sarkozy is proposing to increase the retirement age from 60 to 62 to overcome the longevity issues putting pressure on the pension system. This year the pension shortfall is reportedly €32 billion.

France’s sovereign wealth fund, Fonds de reserve pour les retraites, had €35.7 billion at the end of September, and the use of these funds is part of the reform proposals.

A suggestion is that from 2011, the income received from the FRR is transferred to the Caisse d’Amortissement de la Dette Sociale (CADES) and the Fonds de Soidarite Vieillesse.

The reform in France is indicative of discussions in other parts of Europe. There is currently a dialogue between employers and employees in The Netherlands about whether reform is needed in its pension contracts.