Home>Editorial>“Black Swan” an excuse for inaction 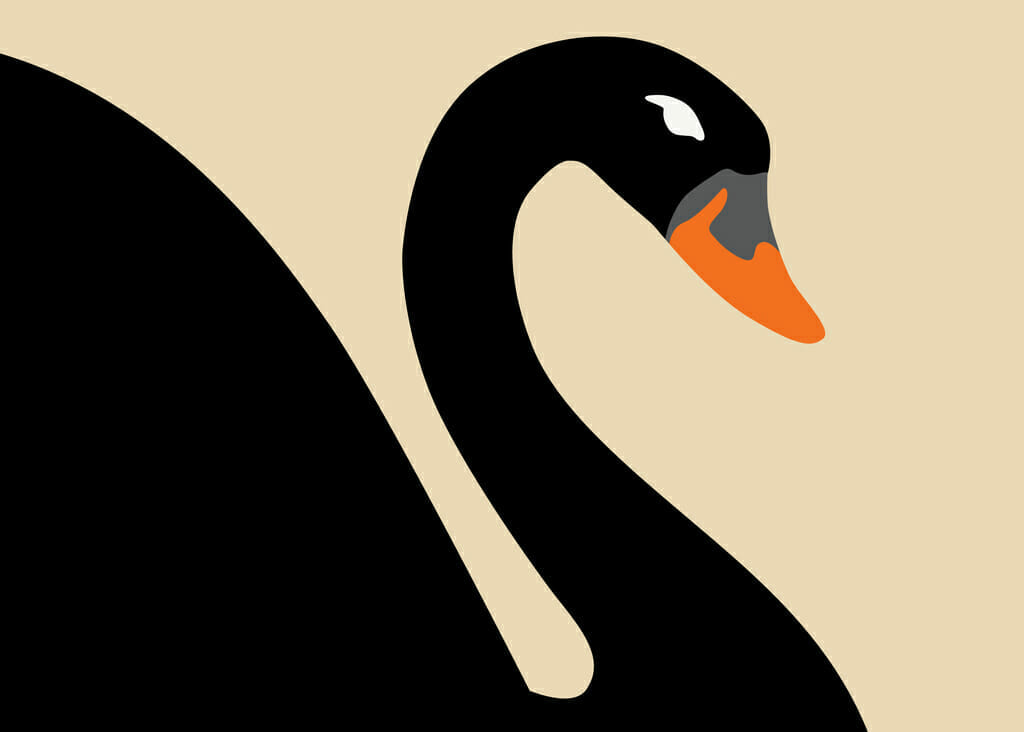 Vector illustration of a black swan on a square beige background.

Black Swan has become a cliché for any bad thing that surprises us. But the onset of COVID-19 was not a Black Swan according to the academic who invented the term and laments its misuse – Nassim Nicholas Taleb.  He saw it coming, as did Bill Gates and others, who warned of its impact in January.

Specifically Taleb wrote about the systemic risk of a health pandemic and its impact on markets in January in a note entitled “Systemic Risk of Pandemic via Novel Pathogens – Coronavirus”. In that he says: “clearly we are dealing with an extreme fat-tailed process…. fat tailed-processes have special attributes, making conventional risk-management approaches inadequate.”

Similarly Professor Cameron Hepburn,  Professor of Environmental Economics, and the director of the economics sustainability programme, at the University of Oxford –  not a finance guru, but a climate scientist – saw it coming. He positioned his own wealth and sold out of equities in January. Hepburn believes that climate science can teach finance a thing or two about risk.

So if the investment industry thought COVID-19 was a Black Swan what is missing? Are governance and decision making processes so antiquated and clunky; are egos – built on 10 years of bull markets – too blinding; does the industry lack the incentive to be innovative due to lack of disruption? One thing seems certain, if the finance industry thought that COVDI-19 was a Black Swan then maybe finance needs to evolve its risk modelling to be more forward looking in line with complex adaptive systems thinking.

Andrew Lo at MIT has been banging on about this for a long time, and is perhaps the best academic to cross disciplines – from finance – to address the issues. He says because markets are adaptive and change over time, using models from physics do not work, rather models from biology that look at complex adaptive systems are more appropriate.

Plenty of others, such as Hepburn, have come from the science background and are teaching the investment world how to open their minds. Importantly Hepburn talks about the need to recognise that both the finance and climate environments are complex adaptive systems, and that backward-looking analysis is not appropriate for adequate risk management.

“We need to get out of the old paradigms,” he says. “Even the concept of the Black Swan, doesn’t really help us to capture the fact these distributions are not bell shaped, or fat tailed or non-normal distributions. These are interactions between parts of the economy that are shifting the distribution altogether. So these things that are supposed to be a 1 in 10,000 event become the mean because you’ve shifted the distribution.”

Some in the finance industry have begun to look at new risk systems. Rick Bookstaber, who left his role as head of risk at the University of California endowment tin October, is focused on improving risk management for asset owners. Bookstaber, says an agent-based model is more appropriate than traditional models of risk management that use data from a static environment. A crisis is not static but stems from a series of events with many agents changing the environment often simultaneously.

The continued ignorance and inability of the finance industry to look beyond traditional models in assessing global risks is something that worries David Villa, executive director and chief investment officer of the State of Wisconsin Investment Board.

“Global health networks faced pandemics and potential pandemics in the past with Legionnaires disease, AIDS, bird flu, SARS, and MERS; but going into 2020, the market, press, and others acted as though nobody anticipated a COVID-type event. What bothers me is what other risks may exist in plain sight that the marketplace underestimates?” he says pointing to Professor Stephen Kotkin’s warning of a fomenting revolution on the far right and far left of the political arena.

“Climate change and ocean acidification is disregarded.  War ships on alert and in close proximity in disputed regions of the oceans add uncertainty.  In the background of these risks, the financial promises made to workers to partially replace income in retirement may need to be broken by governments that have failed to properly fund public pensions. The consequences of this myopia will not be felt next quarter or even next year but can easily become a crisis within the next two decades.”

Risk expert, Bob Litterman, puts it in simple terms. He says in managing portfolios investors are managing the future not the past, so using historical data to create a distribution of potential outcomes in the future is limited.

He advocates for the distinction between risk and uncertainty.

“Use the term uncertainty to make the distinction that the future is not something that comes out of a model, it is much more complicated. Models are relatively narrow in focus, but we have to be prepared for things that are not in the model,” he says. “Some of those things are known, such as climate change, we just don’t know the full dimensions of what that will imply.”

The disruption to the global economy due to the COVID-19 pandemic is an example of the potential devastating impact if uncertainty is not considered and managed.

In January, Taleb said: “It will cost something to reduce mobility on the short term, but to fail to do so will eventually cost everything – if not from this event, then one in the future…. policy and decision makers must act swiftly to avoid the fallacy that to have an appropriate respect for uncertainty in the face of possible irreversible catastrophe amounts to “paranoia”, or the converse a belief that nothing can be done.”

So while it may not be known what the next big disruptor to markets will be, it is agreed there will be disruption.

Investors need to work harder to open their minds, their outlook and their processes to allow forward-looking assessment of uncertainty to be a normal part of their asset allocation modelling.