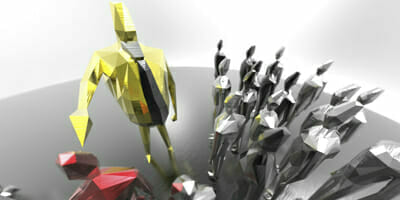 The impact of size is a delicate point for asset managers. For specialist asset classes, and boutique managers, being small and nimble can be a source of alpha. On the other hand, being large can reduce fees and increase innovation and product offering.

But now there is evidence to show that the emergence of the mega manager can also have an impact on the price of the stocks it invests in, other managers’ behaviour and the liquidity and volatility of the market.

In a well-titled INSEAD working paper, Who is afraid of Blackrock?, the authors examine the impact of that 2009 merger in the context of the stock prices of invested listed companies.

The authors estimate that stocks representing more than 60 per cent of world market capitalisation were directly affected because they were held in both BlackRock and BGI-managed portfolios prior to the merger.

In addition, the sheer size of BlackRock means that the firm is now the single largest shareholder in a large number of firms worldwide. The paper takes a close look at the impact of this concentrated ownership and how that affects the investment behaviour of other financial institutions and the cross-section of stocks worldwide.

“We study how the investment behaviour of institutional investors is affected by their strategic reaction to changes in the degree of ownership concentration and how this affects the stock market.”

“We argue that investors are careful to hold stocks with concentrated ownership as these expose them to idiosyncratic shocks of the large owner.

“We find that other institutional investors re-balance away from stocks that experience a large increase in ownership concentration due to the pre-merger portfolio overlap between BlackRock and BGI. Over the same period, institutional ownership migrates towards comparable stocks not held by BGI funds prior to the merger,” the paper says.

More important, the re-allocation of institutional ownership has a price impact, and that stocks that experience large increases in ownership concentration due to the merger experience negative returns that do not fully revert, the paper says.

Who is afraid of Blackrock