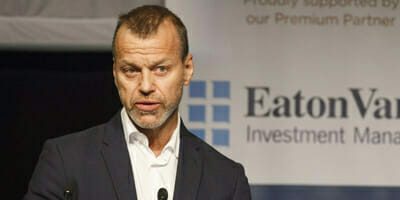 AP4 already has US and emerging markets low-carbon mandates and plans to invest up to $1 billion across various regions. Mikael Johansson, senior portfolio manager global equities, AP4 explains how the concept of responsible investment can be integrated into the investment process of a large pension fund and the challenges in implementing low carbon mandates.

Our starting point is the position that climate change is one of the largest threats to the environment that we have and it concerns a large proportion of all the companies on the stock market and therefore we see it as one of the largest ESG risks.

The premise that according to the inter-government panel on climate change IPCC there is a limited risk in the long term may then damage the global economy with persistent poor growth.  And AP4 believes this will impact pension funds’ ability to achieve their long term targets.

Based on these beliefs in early 2012 AP4 started a project to develop and invest in a low carbon strategy.

Importantly as a universal owner one of the requirements were that it wanted to have full market exposure.

“Also…we needed a suitable portfolio structure for the mandate. And a final objective was that the mandate should be open to other investors in order to make low carbon investment more available. So we set up a fund with together with an external manager.”

The total investment in low carbon mandate is 7 per cent of global equity portfolio and the target is to increase that.

“Our first low carbon fund was completed in November 2012 based on the S&P 500 and we now have $580 million invested in that fund.  In 2013 we continued to develop a low carbon mandate in emerging markets based on the MSCI index. And our current investment amounts to $570 million. We are currently working to make new investment in the Pacific and Europe before the end of 2014. “

The two mandates are based on two different methodologies.

The basic idea is to exclude companies with high relative carbon emission from the benchmark and to optimize the remaining stocks so as to minimize the tracking error against the original benchmark.

“We are trying to isolate the carbon price risk so it would be a passive mandate but with a low exposure to carbon price. In the USA the starting point is the S&P 500. The constituents are ranked by their carbon footprint which is defined as the company’s annual greenhouse emissions divided by annual revenues,” he explains.

“We use revenues to normalize carbon footprint in order to avoid size effects in the screening. The 100 companies with the highest carbon footprint are excluded but the exclusions in each sector cannot exceed 50 percent of the original sector weight. The reason is to avoid large sector exposures. The remaining equities are optimised to minimise tracking error v S&P 500.”

However, only a maximum of three companies per sector based on each parameter could be excluded. The reason for that is to limit the active sector exposures. The remaining companies are then optimized in order to maximize the reduction of carbon footprint subject to maintaining the tracking error below than 90 bps against the standard index.

There are also other constraints on active exposures to sectors and countries.

How well have these two low carbon mandates performed?

The carbon reduction in the US fund has been 55 per cent compared to the S&P which is above the target set by AP4, and the realized tracking error around 52 basis points.

Since inception the US low carbon fund has underperformed the S&P by 1 basis point.

“We have seen periods of low outperformance and low limited underperformance. The mandate has been running for 22 months and even though we think the period is too short for proper evaluation our assessment is that it looks promising,” he says.

“The EM low carbon fund has seen a carbon reduction of 85 per cent. The tracking error is 92 basis points. This methodology is clearly more aggressive than the other, but it is reasonable due to the nature of emerging markets. A tighter restriction on sector exposure than the standard index, that was implemented in May, that will hopefully lead to somewhat tighter tracking error. The EM fund has underperformed the standard index by 140 bps over 10 months. We think it is still too short to evaluate and we will continue to monitor it.”
Internal support key to success

Strong support from the board and management were critical to the success of the mandate design and implementation, Johansson says.

“To begin with we had very strong from the board and management all the way down the organisation. The project had high priority and it was therefore easy to implement. Another important factor was that the mandates fitted very well into our strategic portfolio with an investment horizon of three to fifteen years.”

He also identifies picking the right partners as crucial to success.

“Our partners have contributed greatly to our low carbon project and they worked hard to find good solutions both in terms of the indexes and the low carbon funds.”

AP4 plans to continue down the path of low-carbon mandates, and will invest in a Pacific region and Europe mandates by the end of this year.

Furthermore it is a target to measure the carbon exposure of the total equity exposure by the end of the year.

“We also expect investment in low carbon strategies will become more available at the same time as index providers are developing new standard indexes with carbon reduction,” he says. “In terms of policy it is difficult to predict if and when politicians will impose taxes or higher fees related to higher carbon emissions. However we expect the rhetoric will intensify.”

MSCI now has a set of Global Low Carbon Leaders Indexes, consisting of companies with significantly lower carbon exposures than the broader market.

This was developed with AP4 as well as the French reserve fund, FRR and Aumundi.

Mikael  Johansson was speaking at the Australian Superannuation Investors conference in Alice Springs.