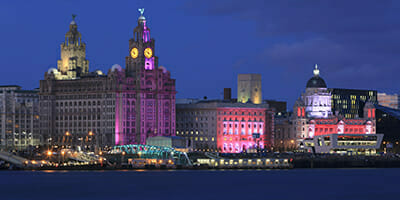 “Markets are being driven by liquidity from central banks; this is more about central banks just needing to reassure investors,” he says.

“It is bonds, to our mind, that are over-valued in the medium to long term.”

There is another reason why Wallach, speaking from the local authority fund’s Liverpool headquarters on the banks of the Mersey, can afford to play down recent jitters in global equities. Despite the £5.75 billion open, defined-benefit local authority scheme still being very much in growth mode, a strategy to iron out volatility has afforded Merseyside an extra cushion from market bouts like today’s.

The fund has a 55 per cent equity allocation; a 10 per cent real estate allocation invested in the UK and international and specialist property funds; 14 per cent in alternatives; and 1 per cent in cash. The balance is in fixed income, namely government and corporate bonds. It’s an asset mix shaped by a gradual paring down of the fund’s equity exposure and boosting of its alternatives in a strategy designed to end the volatility attached to the large equity portfolios typical of many local authority schemes where the average equity allocation is 63 per cent.

In 2007 Merseyside’s only alternative allocations were to private equity and hedge funds. Now its alternative holdings encompass private equity (4 per cent) hedge funds (5 per cent) infrastructure (2 per cent) and an opportunities fund (3 per cent). A seven-strong team manages the entire alternative portfolio in. In contrast the full bond and the majority of the equity mandates are run externally.

“Excluding private equity our alternatives are less correlated; there was also a feeling that bonds wouldn’t give us the returns we needed and that core infrastructure was more likely to,” says Wallach, who ran portfolios for high-net-worth individuals (HNWIs) as a private sector wealth manager before joining Merseyside.

“I suppose you could say I’ve bought a more commercial outlook.”

Within the alternatives allocation, private equity is doing best. In a strategy honed over the past 20 years, Merseyside uses advisors but identifies, implements and monitors all private equity plays in-house, holding a diverse portfolio split by geography, vintage and fund type, although Wallach notes the geographical diversity is increasingly less significant as funds become more global.

“Apart from small European or US buy-out funds, a geographical weighting is hard now because large buy-out funds aren’t limited by geography,” he says.

The shift away from regional plays hasn’t impacted returns, averaging 14 per cent a year for the last two decades.

“We are very pleased with private equity,” he says.

Although Wallach hasn’t ruled out investing in the government’s Pension Infrastructure Platform (PIP), Merseyside isn’t a founder investor because of the start-up nature of the fund.

“In principle the PIP makes a lot of sense and we will continue to evaluate it as it comes on stream but we wanted to get money to work more quickly and the PIP is still in its genesis,” Wallach says.

A long look at hedge funds

It is hedge funds that have been the trickiest alternative. Although the allocation has modestly outperformed HRRX hedge fund indices, lacklustre returns and a changed market prompted the scheme to take a “long look” at its hedge fund allocations six months ago, testing their case for remaining in the portfolio.

“Absolute returns in the hedge fund allocation have only been satisfactory and not as high as we would have liked over the past five years,” Wallach says.

He who attributes part of the problem to the strong equity market.

“Hedge funds need more differentiation at the stock level and dispersion of returns has been low for a long time,” he says.

“However I do think the market is starting to move back in favour of equity long short and arbitrage funds as dispersion increases.”

In another strategy to reduce volatility, Merseyside has invested in smart beta. About five years ago, around the same time it pushed its allocation to alternatives, the fund allocated 3 per cent of its equity portfolio to an actively managed European minimum variance portfolio with Swiss asset manager Unigestion.

“We think there is a lot to be said for smart beta,” enthuses Wallach.

“The idea that the greater risk leads to the greater return has been challenged by the persistent outperformance of low volatility stocks.”

Since inception, returns have been 81.1 per cent, beating the benchmark, and with a volatility of 16 per cent against the benchmark’s 21.5 per cent. Given the European benchmark has risen 66.6 per cent over the equivalent period, Wallach is quick to credit what he calls an element of luck in the timing of the investment – but he says it’s a strategy that is likely to grow at the fund nonetheless.

“It’s not a silver bullet; we’d always hold it alongside other equity strategies,” he says.

Within that broader equity allocation, all US mandates are passive.

“The US is the most efficient market; it’s very difficult to outperform here,” Wallach says.

The UK is a mixture of active and passive while Japan and emerging market equity allocations are wholly active. Merseyside also allocates its equity portfolio regionally, rather than globally in a targeted approach because “the world is an enormous benchmark”.

It is a strategy also designed to tap growth in fast-growing mid-cap stocks. Although global managers get to invest in the best companies in the world, this way Merseyside can invest in companies further down the market capitalization scale, Wallach explains.

“By default we end up looking at a larger number of stocks,” he says.

Although Wallach notes Merseyside’s gradual shift in maturity it has not had an impact on investment strategy yet.

“We have matured much more quickly in the last six years but it is not a significant worry,” he says.

“We are putting things in place to manage our maturity.”

Early signs include a shift from cash positive to cash negative in terms of payments, although Wallach says the fund has a buffer in substantial investment income. The scheme is looking at ways to hedge its liabilities more effectively but will only put such strategies in place when it’s “appropriate.” It already offers a few of its employers tailored liability matching strategies.

“There is a lot more scaremongering about the effects of maturity than is warranted,” he says.

One of the UK’s largest local authority schemes, and the first amongst its peers to adopt innovative strategies, when the time comes Merseyside is sure to lead here too.