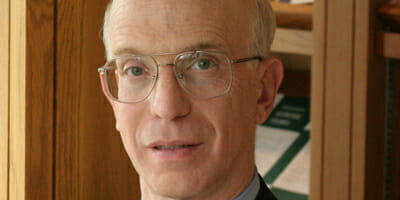 Pension funds or any investor holding a slug of long-term fixed income needs to factor in some capital losses soon, says Princeton academic and former vice president of the Federal Reserve, Alan Blinder.

“The timing is difficult to predict, but three or 15 months, it doesn’t matter. It is predictable,” he says. “The unpredictable part is the risk spreads. When interest rates increase what happens to spreads between US treasuries and AA bonds, or US and Brazilian bonds, you name it, it is not very predictable.”

What is obvious is there will be a pure capital loss on holding duration.

Blinder says interest rates have to go up but the timing of when that will start is uncertain.

“There is zero uncertainty around the fact that interest rates will go up substantially. That’s important because if you were running a pension fund, usually you can’t say that with certainty. The timing of when it starts and how fast they will rise is uncertain,” he says. “But they will start sooner and go up faster than central banks want it to go. Markets will get hyper-excited and overreact. There is no doubt Ben Bernanke would like to see a gradual normalisation. My worry is the markets’ reaction.”

Blinder says it is a “close call” whether to invest in credit, but he probably wouldn’t. And part of the game changer is that central banks are now working on the long end.

“It used to be a simple story,” he says. “If the economic climate is getting better, then you wouldn’t expect risk spreads to widen, but if because central banks are generating it, then spreads would widen.”

In the US he says he is less confident about the economic outlook than market opinion.

“The market swings too whimsically in both directions. It is too euphoric about fickle indicators like confidence,” he says. “I’m more worried than confident about the US economy in the next two years. In the long term I’m confident about the US’ ability to supply goods, but in the short term we need buyers.”

More generally, he is bemused by the actions of governments and the way they are acting as dampeners of demand.

“It is unprecedented to see governments contracting in period of economic weakness. Greece can blame the IMF, but the US can’t, the government should be spending.”

A paradox of public opinion

Blinder says there is a paradox of public opinion with regard to fiscal rectitude.

“The voters love it at the level of lip service, but hate it at the level of implementation. Politicians need to craft the message – don’t come in talking Keynsian and say we want to raise the deficit, say our bridges are falling down or people are starving.”

Similarly, in Europe Blinder thinks it should be abundantly clear that fiscal austerity doesn’t work.

“This is an opportunity for investors to be suppliers of capital,” he says. “If I was a Belgian investment fund, I would think of sending money to the US.”

From a monetary point of view, Blinder was one of the economists who advocated that the European Central Bank was the only institution that could stand behind the euro.

It is astonishing to him now that president of the ECB, Mario Draghi, just had to pledge that “he’d do whatever it takes”, without actually doing anything and have an effect.

Blinder, who was vice chairman of the board of governors of the Federal Reserve System from June 1994 until January 1996, is the Gordon S Rentschler Memorial Professor of Economics and Public Affairs at Princeton University. He was also a member of former president Clinton’s original council of economic advisers.

His latest book, After the Music Stopped, looks at the 2007 crisis, asking not who done it but why they did it.