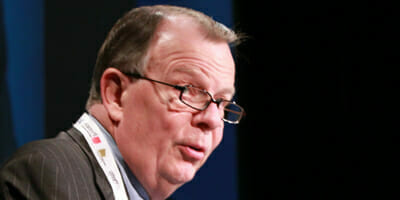 As the world and companies globalise, George Siguler, managing director and founding partner of private equity firm, Siguler Guff, has a simple recommendation for investors.

“My recommendation for stock investors is to look at great global companies,” he says. “Look at companies like Johnson and Johnson, Unilever or Boeing. They all have great balance sheets and are great businesses. They are unique businesses.”

Siguler, who is also on the board of MSCI, serves on the pension advisory committee of the International Monetary Fund and is on the board of overseers of the Hoover Institute at Stanford University, says the current environment can “justify good quality companies”.

“Warren Buffett doesn’t need Riskmetrics to understand his portfolio,” he says. “If Buffett was running a pension fund he would buy good companies like Amex, Coke or McDonalds, and hold them forever.”

Siguler says that despite the recent crisis, the US is in recovery, and points to the considerable growth among small companies, of which there are 40,000 in the US where, as a private equity firm, Siguler Guff invests.

He believes the US economy is in recovery.

“The US economy is still a mess, but it is in recovery. It is slow but moving in the right direction,” he said. “It’s been a rough ride.”

It is not only the US federal debt, which at $17 trillion is equal to the debt around the time of World War II, but the social security unfunded liabilities are also around $17 trillion.

“There are only four ways a government can fix this. They can tax, spend less, grow or inflate,” he said. “Can we effectively make this happen? We have to.”

Similarly, on the upside Siguler said the US is going through a revolution in energy, with its natural gas at a quarter of the world price and a newfound self-sufficiency in oil.

His experience tells him that the current crisis is nothing new and points to the fact the purchasing power of the Harvard Management Company declined by 80 per cent from the mid 1960s to the early 1980s.

Siguler, who wrote the business plan, strategy and team structure for the evolution of the Harvard endowment, says its recent private equity problems are more perceived than real.

But Siguler is also adamant the players in the financial services good chain need to take some responsibility and that there has to be some criminal punishment for the “creativity of Wall Street”.

“There was a time when your investment banker was your partner, your fiduciary. Now every transaction with a financial services firm is adversarial. If the word fiduciary was introduced in legislation that would solve the problems of Dodd Frank – people need to behave ethically,” he says.

Siguler Guff, which has a number of multi-manager funds including distressed opportunities, BRIC and small buyout as well as direct funds, was an early investor in Russia. It also has a strong presence in Brazil and China, where Siguler describes its reported demise as exaggerated, and recently made its first investment in Turkey. The next frontier for the firm is Africa.