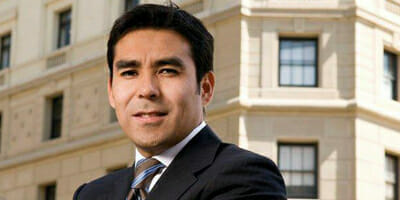 They may be on opposite sides of the Earth, but Chile in Latin America and Central Asia’s sparsely populated Mongolia share more than a few similarities. Both boast some of the biggest copper deposits in the world and now Mongolia has turned to Chile for advice on how best to steward income from its forecast bounty that stretches out beneath the Gobi desert. It is sourcing help from one of the architect’s of Chile’s rocketing $22.9-billion sovereign fund. Eric Parrado, former international financial coordinator at Chile’s ministry of finance and now advising other emerging economies on the steps to managing resource wealth, has become synonymous with Chile’s global reputation on wealth fund expertise. “At the beginning in Chile nobody thought there was any point in saving money because we were an emerging market economy. Chile needed to spend money, so why save it?” says Parrado, just back from the Mongolian capital Ulan Bator. “But by saving in the good times, we were able to spend in the crisis and now all our critics applaud us.”

A guide for novice sovereign savers

His advice to Mongolia starts with tight fiscal management. Mongolia passed a new fiscal stability law in 2011, the foundation, says Parrado, on which any successful sovereign wealth fund must stand and the key to establishing discipline in commodity-driven economies prone to boom and bust. In a next step, Mongolia is drawing up a bill to create a framework for several sovereign funds, which will likely take on similar lines to Chile’s Pension Reserve Fund, established in 2006, and the Economic and Social Stabilisation Fund (ESSF), set up in 2007. The concept behind any stabilisation, or rainy-day fund, is to keep investment strategy liquid and conservative so financial help is close to hand in times of economic crisis. A pension reserve fund would cover future state pension liabilities and Mongolia is also considering a future generations fund, through which returns, but not capital, could be used to invest domestically. “Mongolia has only just begun discussions and there is no money to invest as yet, but it is likely assets will be split between these types of funds,” he says.

In his guide for novice sovereign savers, Parrado counsels that assets be allocated to safe and liquid allocations overseas to avoid Dutch disease, so-called after The Netherlands economy slumped following discoveries of natural gas in the North Sea in the 1960s. Investment strategy for countries without any experience of “formal strategies” should mirror the same asset allocation as their central banks use to manage international reserves. “This is what we did in Chile,” he says. It meant that in the embryonic years of Chile’s sovereign fund, assets were split between a 70-per-cent allocation to US, European and Japanese sovereign debt and a 30-per-cent allocation to money market instruments. “It was plain vanilla but it was very good,” says Parrado. “Between 2007 and 2010 Chile had some of the best returns in the sovereign wealth fund world because we chose safe assets.” He doesn’t advise rejigging allocations in the early stages of a fund’s life, drawing on the experiences of seasoned sovereign saver Norway during the financial crisis as an example of the merits of leaving investment strategy well alone. “Take the case of Norway,” he says, referring to Norway’s $650-billion Government Pension Fund Global. “In 2008 they decided to boost their equity allocation to 60 per cent. Equities were falling yet they had to buy more equities to reach the 60-per-cent mark. They lost $100 billion in 2008. It was really crazy and there is no way Chile could have done this.”

Benchmarks rather than indices

Only after what he calls “an essential learning process” did Chile begin to think about diversifying to other asset classes to manage risk. Assets were split to encompass equities and corporate bonds in passive, global strategies. “An active strategy isn’t worth it because it’s too difficult to gain against the market. There shouldn’t be any cherry picking, but following benchmarks rather than investing in indices.” Since Chile’s central bank had no specific experience of managing these riskier allocations, it used external managers for its equity and corporate bond portfolio. “One hundred and 10 external managers were invited to the ministry of finance,” he recalls. “Because it was 2008 and the middle of the crisis, we postponed allocation until 2012, awarding the biggest to Blackrock, Bank of New York Mellon, and Rogge. We have benchmarks and tracking errors for each one in passive strategies.”

Parrado acknowledges that saving is a hard sell in developing countries in need of investment in infrastructure, schools and health, but warns that Mongolia, one of the poorest countries in Asia, should only draw on sovereign reserves if they are channelled through the budget. It’s a strategy Norway leads on, with the government spending just 4 per cent of its sovereign fund’s annual return. It rules out strategic investment such as equity stakes in local companies, something Singapore’s sovereign fund GIC favours, but it ensures against downside risk. “Investing in local companies could work, but in my view, emerging market economies should only use the fund as a financing mechanism and shouldn’t invest directly in this way. It would involve careful allocation of money and an awareness of what type of investment was actually needed to ensure there weren’t white elephants everywhere.”

Risk rather than return

Nor does he suggest new funds target returns. Instead they should focus on risk, a strategy he believes is key to “preserving capital and legitimising the savings process” in poor countries. “All funds should begin from the point of expected risks rather than expected returns.” His advice to Mongolia is also to avoid some sectors of the economy to reduce risk further. In Chile managers are asked to not invest in Chilean copper companies because the risk correlation is too high in terms of economic activity.

In an era when sovereign wealth funds have become “flavour of the month”, Parrado doesn’t recommend any flamboyant asset diversification or that countries fashion strategic funds targeting local development. He espouses rigorous institutions and frameworks and cautions strategies in a model that now speaks for itself. “Of course there are different strategies and it is entirely dependent on what a government wants to do,” he says. “But from Chile’s experience in starting a fund from scratch in an economy that is close to other emerging market economies, this is the strategy we recommend.”