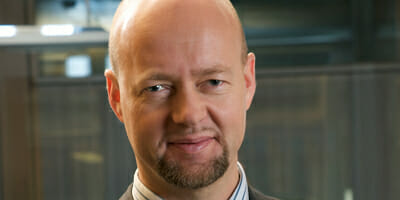 On March 8 when Yngve Slyngstad announced the annual results of Norway’s sovereign wealth fund, he did more than unveil a routine set of numbers. The chief executive of The Norges Bank Investment Management (NBIM), which manages the Government Pension Fund Global (GPFG), was also revealing the first results following what he called a “substantial” change in the $680-billion oil fund’s investment strategy last year. “While in 2011 the fund invested NOK 150 billion ($27 billion) of the year’s capital transfers in European equities, in 2012 the fund invested nearly an equivalent amount in emerging bond markets”, Slyngstad observed.

Øystein Olsen (pictured left), governor of Norway’s central Norges Bank, which via NBIM supervises the GPFG on behalf of the government, explained the reason for this shift towards emerging markets in his introduction to the annual report. “On the whole, emerging markets are characterised by factors that, in isolation, contribute to higher risk – in the short term,” said Olsen. “Nevertheless, we believe that over time, the changes that have been implemented are firmly in keeping with the objective of Norges Bank’s management of the fund: safeguarding financial wealth for future generations.” In his own introductory remarks to the report, Slyngstad added that the GPFG’s management seeks “to secure the international purchasing power of future generations by broadening the fund’s exposure to growth in the global economy.” As he also noted when presenting the 2012 results, a significant incentive for reducing the fund’s exposure to Europe is to reduce exchange rate risk; since the start of 2009, Norway’s currency, perceived as a safe haven from Europe’s sovereign debt crisis, has risen more than 20 per cent against the euro.

Still a long way to go?

Based on the 2012 numbers, Slyngstad believes the new strategy is on track, although he cautioned when presenting the results that there is still a long way to go. Last year the GPFG fund delivered a return of 13.4 per cent, or about $80.5 billion, well above the fund’s annual average real return target of 4 per cent, and a sharp recovery from 2011, when the portfolio’s value fell 2.5 per cent. As Slyngstad stressed, “the performance last year was driven by equity investments”, especially in Europe. By contrast, fixed-income investments returned 6.7 per cent, and the fund’s new real estate portfolio – focused on commercial properties in the UK, France and Switzerland – rose 5.8 per cent in value.

Slyngstad also noted when presenting the results that the fund is remains well short of its eventual goal to reduce Europe’s share of the total portfolio to 40 per cent. In 2012, 48 per cent of all assets were held in Europe, down from about 53 per cent in 2011. North America accounted for a further 32 per cent, with Asia (including China) claiming 13 per cent. The United States remained by far the most important focus for the Norwegians, delivering 28.6 per cent of the fund’s overall value in 2012, of which 17.4 per cent came from equities, and 11.2 per cent from bonds. The UK came second, representing about 13 per cent of the fund, split between 9.6 per cent for equities and 3.4 per cent in fixed income.

The Norwegians’ commitment to shift the geographic weight of the portfolio is clear, however, aided by a change last year in the allocation of fixed income investments. Under its revised mandate, the GPFG is now weighting government bonds – which account for 73 per cent of the fixed income portfolio – based on the size of a country’s economy instead of the size of its debt. Furthermore, the mandate authorises the fund to buy bonds in nine emerging market currencies. The outcome in 2012 was an immediate move into emerging market bonds, which altered the profile of the GPFG’s fixed income portfolio. At the end of 2011, emerging-market government debt represented just 0.4 per cent of the bond portfolio; a year later, that had risen to about 10 per cent.

China, the world’s second-largest economy, was the key example. At current exchange rates, the GPFG’s government bond investments soared from about $34 million on December 31, 2011 to about $889 million a year later, based on the global list of fixed income holdings published on Norges Bank’s website at the same time as the annual results. To provide some perspective, NBIM finished 2012 owning $18.54 billion in Japanese sovereign debt, more than twenty times its equivalent China exposure. But the trend by Norway towards selected higher yield emerging-market government bonds is plain.

After China, Mexico offers one of the most striking illustrations of the GPFG’s active presence in developing countries’ debt markets. Last year, the GPFG’s exposure to Mexican sovereign debt shot up from about $500 million at the end of 2011 to more than $4 billion. The GPFG was also an active buyer of Indian government bonds, with about $13 billion in holdings at the end of 2012. It also moved into Russian sovereign debt, with about a $3-billion exposure, and increased its investment in South Korean government bonds to $3.73 billion. Meanwhile, Norway reduced its sovereign exposure to weak eurozone economies, particularly France and Italy, where the GPFG’s government bond holdings dropped sharply.

While Slyngstad drew attention to the bond portfolio, the fund also aims to increase its equity exposure in developing markets from about 9 per cent in 2012 to 12 per cent. Thanks to Norway’s unrivalled transparency, it is possible to follow the fund’s progress towards this goal through its list of stock holdings, with China again the major test case. In 2012 China accounted for about 1.6 per cent of all the fund’s equity assets, spread across 303 holdings, which overall returned 13 per cent for the year. At the same time, the GPFG consolidated its mainland stock portfolio, which at the end of 2011 contained stakes in about 1000 Chinese companies. Almost all the divestments in 2012 were small caps – names like the Da An Gene Co Ltd, the Shenzhen Wu’er Heat Shrinkable Material Co Ltd and the Wuxi Huaguang Boiler Co Ltd.

The portfolio is now centred around larger national and provincial-level state enterprises, such as China Eastern Airlines, where the GPFG owns 0.03 per cent, and the China Yangtze Power Company (0.04 per cent). As a member of China’s Qualified Foreign Institutional Investor (QFII) program, the fund is allowed to invest up to $1 billion on the Shanghai or Shenzhen stock exchanges. Slyngstad has confirmed that the GPFG has applied for an increase in the quota now that Beijing has removed the upper limit for state-owned funds. He says he expects equity investments in China to be notably higher by the end of 2013.

Real estate, the smallest component of the GPFG’s global investment portfolio, also seems set for rapid growth, as top1000funds.com reported last October. The fund began buying commercial property in the UK and France in 2011, and has since added Switzerland to its European real estate holdings. In 2012, the market value of the GPFG’s expanding property assets reached about $3.96 billion. And in February 2013, the fund bought just under 50 per cent of an office real-estate portfolio valued at $1.2 billion in New York City, Washington DC and Boston from asset management firm, TIAA-CREF, which remains the majority partner.

This is not, in sum, a fund for investment managers accustomed to passive index tracking – either internally or across 55 external mandates. As Slyngstad concluded in his notes for the 2012 annual report, “risk management and active ownership were strengthened”. In the coming years, his pledge to make the fund’s strategy still more transparent means other investors will be able to chart Norway’s progress towards a more globally balanced portfolio.