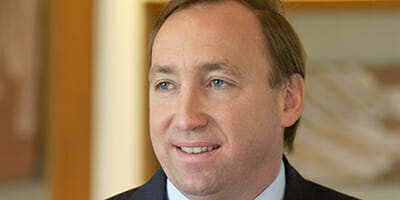 Asia will be a growing part of investors’ portfolios, predicts the chief investment officer of AustralianSuper, Mark Delaney. He is steering the $43-billion fund towards the Asian century with up to 45 per cent of its international equities now in emerging markets.

Asia represents about half of this emerging market exposure and, despite the flight from risk assets in light of recent market uncertainty, Delaney says that the fund has maintained its allocation to emerging markets.

“We still think that equities will be the main game, because growth is one of the key reasons we are going into these markets and equities are the main beneficiaries of economic growth.”

In addition to a growing focus on emerging markets and Asia, Delaney is starting a long journey towards moving Australia’s biggest industry super fund from an outsourced investment model to gradually building internal management capacity across asset classes.

Delaney describes the process as a long-term goal, which will begin with the investment team internally managing part of its Australian equity allocation.

Small cap Australian equities will continue to be externally managed, but the team will focus on the broader market.

Currently, half of its Australian equities are passively managed.

There are 40 members in the investment team, with half in operations and half in the policy part of the portfolio.

The fund is aiming to add an additional 10 to 20 additional staff members.

Moving into Asia
Along with looking at its internal capacity, Delaney says the fund has also rethought its approach to credit, recently investing in direct-credit opportunities in infrastructure and property.

The investment team has also kept to its longstanding policy of not investing in hedge funds, with the one exception of maintaining its lengthy relationship with Bridgewater.

The approach to hedge funds is to “keep things simple” and it is a method the fund has extended to its push into Asia.

AustralianSuper has limited its foray into emerging markets to predominately equity exposures. Delaney notes that low yields on emerging-market sovereign debt don’t make it a compelling opportunity and he is cautious about the execution risk of investing in unlisted assets.

Candid about the fund’s capabilities in Asia, Delaney says the fund is seeking the advice of experienced operators in the region, recently hired a fulltime member of the investment team in China and is launching an Asian advisory board.

The board, chaired by former Reserve Bank governor Bernie Fraser, will advise the fund as it looks to increase the breadth and depth of its exposures to the region in the coming years.

Delaney says the advisory board is there to add to the knowledge of the investment team, and help “avoid some of the mistakes” other investors have made when putting capital to work in Asia.

Beyond passive
For Australian funds, the question of emerging market exposures always comes with the concern that these funds may be doubling down or duplicating exposures already gained through domestic holdings.

With the Australian Stock Exchange dominated by resource giants and the country’s four big banks – many of which are rolling out their own Asian growth strategies – concentrations of risk must be carefully managed.

Delaney turns this argument on its head, looking beyond blunt geographic exposures to underlying sector exposures.

He argues that Australian investors must adapt their portfolios to Asia as it matures if they are to maintain and potentially grow their exposure to the future engine room of the world’s economy.

“We think in the medium term, as Asia matures and becomes less resource-intensive, we will have to substitute indirect resource exposure for more direct consumer exposure,” he points out.

To do this the fund has looked beyond a passive approach with major indexes –such as the MSCI All Country World Index – that have greater exposure to the financial and energy sectors in emerging markets.

Delaney explains that all its international equities, including emerging markets, are actively managed.

Biding its time
However, the fund is prepared to be patient in executing its strategy; Delaney notes it avoided increasing its emerging-market equities holdings in last year’s volatility.

Emerging market equities were one of the worst performing asset classes last year and were caught up in the selling off of risk assets.

But Delaney says that moments of market pessimism can be a potential opportunity for those investors with a longer term perspective.

“Always, falling prices should make stocks more attractive in a world of relative equity allocations between emerging markets and markets elsewhere. A lot of markets have fallen,” he says.

“Emerging markets are now at a discount to developed markets, which is where they have historically traded, and the investor optimism has disappeared from emerging markets. Probably, it makes it a better time to invest than 12 to 18 months ago. We haven’t done anything yet but the preconditions are falling into place.”

Delaney says the fund has done extensive work investigating the relative merits of different ways to access the growth story of emerging markets.

One potential strategy is to look for large multinational companies listed in developed markets that generate revenue from emerging markets, in particular Asia.

The fund’s investment team looked at this option but its research revealed that the theory didn’t stack up to the reality of where the sources of revenue for these companies were coming from.

The fund’s research focused on both European and US-listed companies and revealed that between 20 and 30 per cent of revenues are derived from Asia, Delaney explains.

“For stocks listed in the US and Europe, the vast majority of their revenues come from activities in their region,” he says.

The fund has gradually increased its holdings of emerging markets equity by reinvesting income from its developed markets segment of the equities portfolio, Delaney explains.

Managing risk: in or out?

The fund has also developed an in-house risk management system that manages risk across asset classes.

“We have our own risk model that we run, and it is based predominately at the asset-class level rather than the stock-selection level,” Delaney says.

“We are not trying to add each individual stock to the total; we are trying to work on the broad asset classes and what the major risks are. We will look at the level of absolute risk we take and the amount of relative risk we take, and the components thereof.”

As part of its risk management the fund does liquidity testing, modeling how the portfolio will perform in a market downturn.

The fund has a broad objective to have only about one-third of its assets in the balanced fund, its default option, in illiquid assets.

Delaney says that liquidity is generally understood to be an asset that can be liquidated in less than three months.

In addition to its internal risk management system, the investment team looks at asset allocation and sector tilts are also decided internally.

“All asset classes are currently external, but we are looking to bring part of Aussie equities internal and we will look to diversify that over the next three to four years,” he says.

“We will start carefully and if [internal management] proves to be successful, it will attract more capital, like any other manager works,” he says.

Nuts and bolts
The current strategic asset allocation in its default balanced fund is as follows:

The fund has adopted a dynamic asset allocation approach for more than 10 years, and looks at its holdings on a monthly basis.

As of June 30, the fund’s balanced option achieved a 1 per cent return for the financial year, compared to an Australian superannuation industry median return of 0.5 per cent. This followed two consecutive years of strong returns of 10.3 per cent and 10.1 per cent. The balanced option has averaged 9.3 per cent a year since inception in August 1985 and over a 10-year period has achieved an annual return of 6.4 per cent.