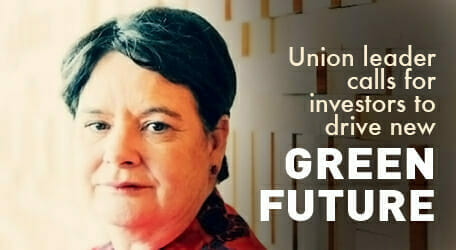 Institutional investors need to move beyond “bombastic support” of environmental, social and governance (ESG) issues, says the head of the world’s peak trade union organisation, who also challenges investors to lead change in investment practices rather than just offer rhetorical support of the UNPRI.

Sharan Burrow, general secretary of the International Trade Union Confederation (ITUC), says investors need to drive the green investment agenda rather than be passive participants in a status quo dominated by what she calls the “dormant agenda” of the financial sector.

“Serious investors need to look at the sustainability of capital and their responsibility under UNPRI,” Burrow says.

It is a hands-off approach to blame government policy for their own inaction, Burrow says.

“We are seeing the planning that goes to into sustainability,” she says. “South Africa, for example, has a growth plan which includes a 60 per cent target in green infrastructure and investment. Brazil and Argentina are conscious of investing in a green economy; and there are a dozen or so more countries I could name. It is no excuse for investors to say government is not capable of managing investments in that.

Burrow will discuss the need for an alternative growth model framed by sustainable investment at the upcoming Top1000funds.com-sponsored Fiduciary Investors Symposium in Beijing.

“The transformation of the global economy needs to be green,” she says. “There is a moral responsibility for a healthy and sustainable future, but also the principles of the green economy must reflect and respect the dignity of human beings.”

The ITUC represents 175 million workers in 151 countries and territories and has set out an alternative growth model that focuses on stimulating employment through infrastructure and climate-related investments and public services.

Burrow says the IMF, World Bank and G20 governments need to assume leadership and put a halt to “destructive” economic policies such as austerity measures, which she says threaten to create several million more job losses, making it even more unlikely that deficit targets will be reached.

She will be in Washington to present at the World Bank and IMF annual meetings this week.

Burrow says the recent financial crisis is characterised by record high unemployment – and, in particular youth unemployment – that has potential for social catastrophe, low demand and a decline in income share against productivity. It is evidence that classical economic models have failed, Burrow says.

“We have to raise global funds through unorthodox methods to rebalance the global economy,” she says.

To this end the ITUC advocates a financial transactions tax, and Burrow believes Europe will “go it alone” in the first instance.

She says a financial transactions tax would pay for job recovery programs and meet development and climate commitments.

“A financial services tax is absolutely feasible, and it is short-sighted of the industry to object because it will be returned to them in growth and demand through jobs, people, sustainability that underpins their business. It will help their growth,” she says.

“It is extraordinary, they [investors] are actually sowing the seeds of their own destruction. There is no moral responsibility by the financial sector, and this time the crisis should provide a wake-up call: classical economic models have failed.”

Ahead of the Durban climate summit in December and next year’s United Nations Conference on Sustainable Development, Rio+20, in Brazil, the ITUC is developing research and refining its position on investment in green infrastructure and the greening of all industry.

In particular, it is conducting research into the job growth that could be generated by a simple 2 per cent allocation of GDP to a green economy. This research this will be released in October.

“There are certain proposals we’ll write regarding an alternative growth model and a green economy,” Burrow says.

“We’re looking at universal social protection and rights for people, as well as income-led growth and a commitment to a just transition. Investment in new areas of industry must be about green infrastructure.”

The ITUC along with the European Trade Union Institute, the Trade Union Advisory Council and the Global Union Research Network have created a task force to define the parameters of a new growth model based on a more balanced relationship between government and the economy.