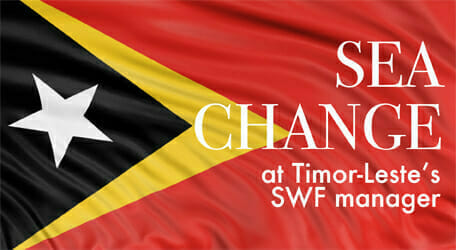 The manager of Timor-Leste’s $8.3 billion sovereign wealth fund, the Banking and Payments Authority (BPA), was inaugurated as the island nation’s central bank on Monday.

The BPA, which has performed central bank functions for more than nine years, became the Central Bank of Timor-Leste on September 13. It has managed the nation’s sovereign wealth fund, built from excess revenues flowing from petroleum operations in the Timor Sea, since the fund’s creation in August 2005.

The Ministry of Finance is responsible for plotting the fund’s investment strategy, which aims to generate returns similar to the Merrill Lynch 0 – 5 year US Government Bond Index, and is advised by Towers Watson.

The BPA invested the entire fund in cash until June 2009, when it appointed the Bank for International Settlements to manage 20 per cent of the fund’s assets in global sovereign and supranational bonds issued in the currencies of the US, UK, eurozone, Japan and Australia.

In October 2010 the fund appointed Schroder Investment Management to invest 4 per cent of its capital in the world’s 23 largest stockmarkets in an ‘enhanced’ passive style.

The fund’s performance from inception to June 2011 was 4 basis points below its benchmark, according to its latest quarterly statement.

The US dollar is the official currency of Timor-Leste. However the central bank issues units of the dollar in denominations of 1, 5, 10, 25 and 50 cents for use in the local economy.