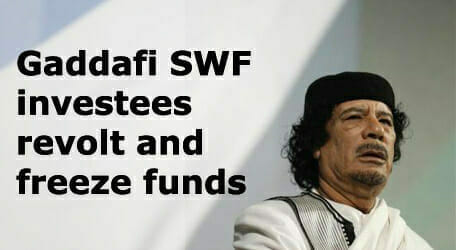 As tensions in Libya increase, a leading authority on sovereign wealth funds has urged investee entities of the Libyan Investment Authority (LIA) to freeze its holdings, until such time as they are needed to rebuild an independent Libya.

Ashby Monk, the co-director of Oxford University’s Sovereign Wealth Fund Project (Oxford SWF), was encouraged by the news that Pearson plc, the publisher of the Financial Times, had interpreted its obligations under the UK Government’s Libya (Financial Sanctions) Order as an immediate freeze of the LIA’s 3.27 per cent stake.

The UK Treasury has frozen the assets of Libyan leader Muammar Gaddafi (pictured), but has not said if the LIA’s assets are included, the BBC reported.

In contrast, the US government has frozen $30 billion of Gaddafi family, LIA and central bank assets.

In addition, the European Union has frozen assets of Col Gaddafi and five family members, the BBC said, and has also banned the supply of arms, ammunition and any equipment that could be used for “internal repression”.

The SWF expert noted that Gaddafi cronies made up most of the LIA trustee board. One trustee, Libyan central bank governor Farhat Bengadara, has not been heard from since the anti-government protests began in earnest.

“Given that the [LIA] is often reported to have roughly $70 billion – which represents nearly 75 per cent of [Libya’s] GDP – the fund could prove extremely useful in reconstruction. So let’s freeze it until such a time as better leadership takes over in the country. Then let’s turn it over to them,” Monk said.

The Oxford SWF Project is funded by the Leverhulme Trust and the The Rotman International Centre for Pension Management. It is tasked with documenting, analysing and conceptualising the governance of sovereign wealth funds.

Monk, who is a research fellow at the University of Oxford, is researching the design and governance of financial institutions, with particular focus on pension and sovereign wealth funds.