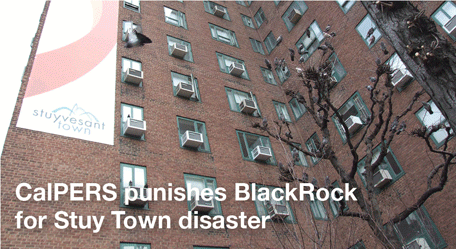 Another page has turned in the history of the Stuyvesant Town – Peter Cooper Village apartment buildings in New York, as iconic as they have been controversial since their initial construction in the 1940s. CalPERS, America’s largest pension fund, has terminated BlackRock, one of its property managers which led a 2006 purchase of the 80-acre site, after a 12-year relationship.

CalPERS wrote off US$500 million of its apartment portfolio after real estate manager Tishman Speyer Properties, which together with BlackRock and investors paid $5.4 billion for what the residents call “Stuy Town”, had given up control of the properties to avoid bankruptcy in January this year.

This week CalPERS terminated a $1 billion apartment management mandate with BlackRock, which had dated back to 1998. The fund has consolidated this with another long-time manager, the privately owned GID Investment Advisers.

The Stuy Town development marked the first major clearing of slum dwellings in New York, starting in 1943, financed largely by the insurer MetLife, which was awarded tax breaks and other government assistance.

It has been the subject of many court actions over the years, some on the basis of race. Courts ruled that the managers did not have to adhere to race discrimination laws applicable for public landlords, despite the government assistance in the development, and almost all the early tenants in the rent-controlled apartments were white.

CalPERS reported a loss of 37 per cent in its total real estate portfolio in the year to June. The fund is anticipating reduced costs and improved efficiency from consolidating its mandates under one partner/manager.