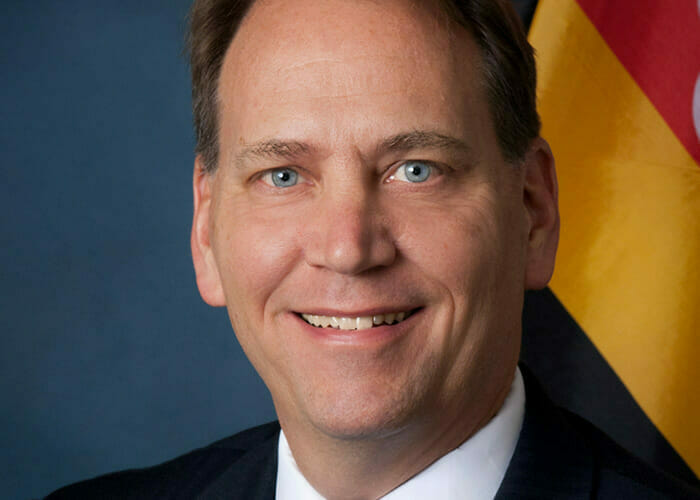 Andrew Palmer, chief investment officer of Maryland State Retirement and Pension System, explains why he puts a policy mistake and the Fed raising interest rates too high at the top of his list of concerns and what it means for how he allocates assets.

The US economy is experiencing all kinds of shocks in today’s volatile world. Government and institutional responses to shocks create more shocks, triggering yet more responses as policy makers scramble to pull the right lever. As the noise and turmoil in financial markets continues, Andrew Palmer, CIO of $64.6 billion Maryland State Retirement and Pension System (MSRP) is increasingly aware of the growing risk of a policy misstep from the Federal Reserve, in danger of triggering a bigger contraction than the economy needs.

“My concern is that the Fed could make a policy mistake,” he says in an interview with Top1000funds.com. “In this environment, it’s very hard to know what they are pushing against. The Fed says it is data dependent, but there is so much noise in the data, it’s hard to know what is going on.”

Casting back to 2018, Palmer says President Trump’s tax cuts unleashed a shock stimulus on an already strong economy, sparking inflation. The pandemic resulted in another series of policy shocks that distorted the rhythm of the economy, most notably creating a demand shock by giving people billions to spend. Now the service side of the US economy has picked up but between the pandemic and immigration policies, the labour market has tightened.

Palmer’s own response has been to moderate risk in the portfolio. For example, he is considering revisiting early 2020 strategies like paring back on risk in the real estate portfolio, going more to core and reducing value add and opportunistic allocations. In credit, trimming risk could involve moving to higher quality and more liquid investments. He is also reconsidering the fund’s historical bias to growth equity. “We are increasingly thinking about growth versus value in equity over the next two to three years. Growth is going to slow – it is already slowing.”

Still, these are only tweaks on the margins of the portfolio. Rather than making significant changes, in times like this he says it is best to leave well alone and trust an investment policy shaped to work in every kind of environment and built for uncertainty.

However, Palmer has just adjusted the portfolio to accommodate another risk. This time last year, Maryland’s investment team concluded an asset allocation study that modelled the impact of climate risk on the portfolio. The conclusion of the study, which involved several years working with the System’s board and investment advisors Meketa, was emphatic: institutional investors are significantly overestimating future returns.

“Our big takeaway was that industry capital market assumptions are not incorporating climate risk at all and portfolios – under different climate scenarios – are all lower than standard models predict.” Arguing that returns are going to be lower “no matter what happens,” Palmer warns that predictions around growth and dividends are based on multiples that go back to historical norms. “Today’s assumptions don’t analyse the impact of climate change on earning streams,” he warns.

His response is to prepare for lower returns ahead, most likely between 50 basis points and 1 per cent over the next 20 years. He is also building out the allocation to inflation-proof assets after the analysis revealed that Maryland’s liabilities are more inflation-sensitive than its assets. To compensate, Palmer wants more infrastructure in the portfolio, targeting 5 per cent of AUM in an allocation that will avoid natural resources like oil, gas and mining investments, the usual go-to inflation-proof asset. “We are going to focus on infrastructure because we want to avoid the impact of climate risk that comes with natural resource assets.”

In today’s challenging environment, Maryland’s large (35 per cent) allocation to private markets via private equity and credit, real estate, real assets and some more illiquid hedge fund allocations, which together provide lower volatility and lagged, more predictable returns through time, is the key source of return.

“Return seeking is a different exercise to beta-seeking,” he explains. “In private equity we are trying to do something that will generate a 20 per cent annualised return over a five-to-seven-year period no matter what happens to the S&P500. It’s a different exercise.”

He also notes other benefits from private markets, like returns being more closely aligned across regions compared to public market returns. For example, although the US has done a touch better than other regions, returns in private equity across US, Europe and Asia over the last 15 years are similar. In contrast, public market returns have varied widely.

The risk of private market investments that he is most mindful of include “dark pool” risk. Private equity investors ploughed money into their portfolios three or even two years before the GFC, unaware of what lay ahead. He is also mindful of liquidity risk, but explains that extensive precautions safeguard Maryland’s private investments from becoming a problem in times of market stress and posing any risk to the fund’s ability to pay out around 3 per cent of its assets under management annually to beneficiaries.

First and foremost, around 20 per cent of fund assets are in liquid TIPS and investment grade bonds. Secondly, the private equity allocation currently “pays for itself” in as much as capital calls are met by distributions, although he recognises that in times of stress this could change. Capital calls and distributions have notably slowed down (by around half) compared to last year. But he observes that in the GFC, distributions stopped but capital calls continued as GPs took advantage of cheap asset prices.

“You could end up with a denominator effect but we’ve done the modelling on this,” he reassures, describing a situation where the value of the portfolio falls because investors don’t get the liquidity back to fund private market capital calls, and must finance new assets by selling cheap public equities.

Other strategies that safeguard Maryland’s liquidity levels include using futures. MSRP can sell its most liquid assets if needed, replacing them with leverage or futures. “If we replace the exposure with derivatives, we have a little more flexibility about implementation,” he says. Finally, he describes the fund’s daily liquidity risk exercise that ensures a daily buffer by modelling potential cash flows from existing cash flows. “We watch it every day and check that the buffer doesn’t deteriorate,” he says.

A corner of Maryland’s private markets allocation carries out a different activity to the rest of the portfolio, offering respite from head-scratching liquidity modelling and return priorities. Palmer got his first proper taste of venture investment at Tennessee Consolidated Retirement System where as deputy CIO an inaugural venture investment, part of a new private equity portfolio set up in 2009 after the GFC, went straight up.

“Venture is like buying a lottery ticket,” he says. “You may invest in 100 companies, 30 of them will fail, you’ll get your money back with some, but one or two may give you ten times your money back and provide the returns for the whole fund.”

Palmer has led the expansion of Maryland’s venture allocation since he took the helm in 2016. But the allocation is still young (with most investments only three years old) with few near the IPO stage or experiencing any rapid ramp up in pricing. The allocation also underperformed in 2021.

“Funds with more mature assets have done better,” he says. Looking ahead, he also predicts managers will struggle to access capital. “Last year, money was free. This year, it’s going to be a struggle for marginal venture companies to access finance over the next 18 months unless they have a path forward.” Still, when creativity and cash successfully ignite he maintains investment becomes truly thrilling in a way that is unique to the US economy.

Fiona ReynoldsDecember 1, 2022
Home>Investor Profile>Maryland’s Andrew Palmer on why policy risk is his number one concern