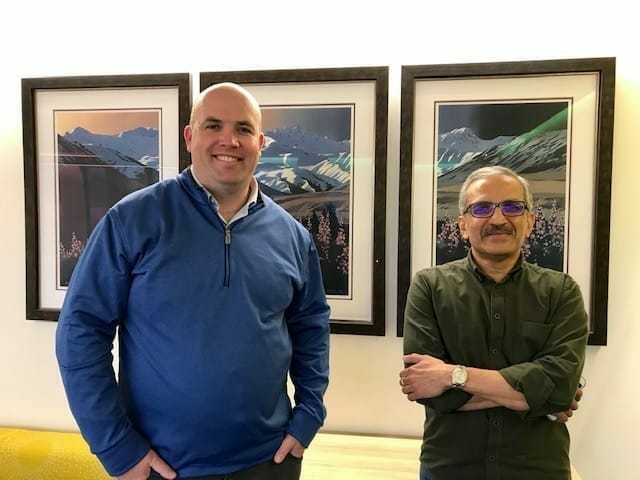 A year ago, the Alaska Permanent Fund appointed its first dedicated chief risk and compliance officer, Sebastian Vadakumcherry. With current investment conditions, and a move to a more conservative outlook, the relationship between Vadakumcherry and CIO, Marcus Frampton is proving its worth. Amanda White looks at the fund’s approach to risk, its outlook for capital markets, and how data will give it an edge.

In October last year Sebastian Vadakumcherry moved to Juneau, Alaska to head up, and create, the Alaska Permanent Fund’s first separate risk management function. For the best part of the past 24 years – with the exception of a five-month stint in Ohio at a credit card company – he worked in the Middle East, most recently heading up risk management at the Gulf Investment Corporation in Kuwait. It’s quite a dramatic shift geographically, but Vadakumcherry says he is buoyed by the opportunity to build the risk function from the ground up.

“I love the build aspect of the role, starting the function from scratch,” he says.

“The way I look at the risk function the primary role is as a business protector, for capital preservation. But that can’t happen without the business enabler part. I don’t want to be a policeman in the organisation, I want to be a partner. A successful strategy is to engage with investment teams right at the beginning. Funds managers know best, but there is always another perspective and success comes from having people accept that different perspective.”

CIO Marcus Frampton says the investment team has much better data on the portfolio as a result of the establishment of a risk management function, which he calls a big step.

But there is still a lot to do to improve data at the fund, particularly given its high allocation to private, and direct investments. The fund uses Aladdin, which Frampton says has “some gaps on the private side”.

“We have more than 100 GP relationships and have co-investment and direct investments. The risk system doesn’t really capture anything other than manual upload, it’s very basic. The world is rich in data but we’re not really capturing it on a centralised basis,” Frampton says. “We need a couple of full-time people dedicated to data, cleaning it and getting it in the system. It’s a big project.”

This need for better data fits into one of Vadakumcherry’s three strategic risk priorities for APFC which fall under strategy, financial and operating risks.

“In the last seven years we have doubled the assets and the people in the team, so we have some catching up to do regarding data,” he says. “Data integrity effort was taking more time than inferencing from data and we want to flip that so data quality work takes up 20 per cent of the time and analysis takes up 80 per cent.”

In order to make sure the fund has the infrastructure it needs for the next five to 10 years it has been laying out processes: to reduce the number of systems and integrate them; cleaning data; and ensuring there is a single source of truth.

“The key thing is the consistency and availability of data on a timely basis,” he says. “Portfolio managers need this at their fingertips, not to have to search for it. It will make a real difference in the next five years and will be an edge for them. We’re aiming to have clean, mapped data across the entire portfolio. As we get more complex it’s becoming necessary.”

The key focus for strategy risk is to ensure that as an organisation it is aligned with its mandate.

The sovereign wealth fund has a simple mission: to invest the funds that have been entrusted to it, in perpetuity. It has two purposes now, to provide a dividend to the Alaskan people and to help fund budget deficits.

“The permanency of the capital and generating a return are the cornerstones. And we need to look at risk management from this strategic component,” Vadakumcherry says.
Of course this includes the asset allocation and Vadakumcherry says a review is important.

“There are changes in the environment that mean we may need to tweak. For example there are disruptive technologies with a shorter cycle than our five-year asset allocation review,” he says.

New and disruptive technologies are one of the macro levers the fund is concerned about, and Vadakumcherry worries about the “risks of continuing with an asset allocation that needs review/tweaking”.

“We are asking what we need to change, for example because of low interest rates, or investments in private equity in new technology, and how does that impact other investments.”

As CIO, Frampton is feeling cautious.

“It is common to point out how late we are in the cycle and I definitely feel that way,” he says.

While the fund’s consultant, Callan Associates has a 10-year return forecast of 7 per cent for the fund, Frampton is more careful.

He points to the Shiller PE multiple – which currently sits at around 30, an equivalent to Black Tuesday but still high in historical terms – and other indicators and says that the return could be more like 2 per cent.

“My outlook is for lower returns. The most common reaction to that is to increase the allocation to riskier assets but a more sensible approach is to do the opposite and take less risk.”

In particular, he points to volatility and believes the markets are only a year or two away from producing returns that vary from +8 per cent to -50 per cent.

When Frampton moved in to the CIO role in September 2018, he was previously head of real assets and absolute returns at the fund, the allocation to cash was $300 million. That figure is now $2.5 billion, with most of it coming out of equities.

“We didn’t have great discipline around rebalancing and were about 6 per cent over in equities. We now have no tolerance to be overweight equities and are sitting at 37.5 per cent against a target of 37 per cent.”

The current allocation is slightly overweight hedge funds, in particular market-neutral strategies which Frampton says “should have a shot at making money in down markets”.

The most significant underweight is in real estate with an allocation of 6 per cent against a target of 11 per cent.

“We are much more conservatively positioned than a year ago, but it’s all at the margin. Sebastian and I are in the bearish camp on markets now.” Frampton says. “I don’t know what will trigger a correction but the ultra-accommodative stance of global Central Banks for such a prolonged period almost guarantees that the inevitable next downturn in markets will be pronounced.”

The fund has been on a long-term plan to increase private markets to 36 per cent by 2021.

Each asset class will have 1 per cent added to it each year until 2021.

“I feel that it’s fast enough and won’t increase it further. The private markets allocations are all coming from equities. My view is we should definitely not decrease fixed income.”

Vadakumcherry is looking at where the hotspots are in the portfolio across different sectors and geographies.

He’s also keen to look at the role of fixed income, which at 20 per cent is a sizable allocation, and how that will be impacted.

“The role of fixed income is very important in the portfolio. It has a diversification role, but also at certain periods such as 2018, it has a role of return maximisation in a way.”

But he also points out that importantly it acts as a liquidity buffer.

“The most important role is an ‘opportunity capital’ role, as a provider of dry powder, it’s the potential it has to be redeployed and be a boost to long term returns.”

The fund’s growth, success and increasing portfolio complexity was the impetus for the creation of a separate risk function, and the way the CIO and CRO functions are working together is paying off.

“The separation of risk from the investment space is important. There is always continuous engagement and discussion between the teams, but it is important to have a separate function. There is more relevance now assigned to that function,” he says.

“We all have the same goal to maximise returns, and to invest you need to take risk. Our function is to make sure we understand the risks and they are in line with what we want to do.”