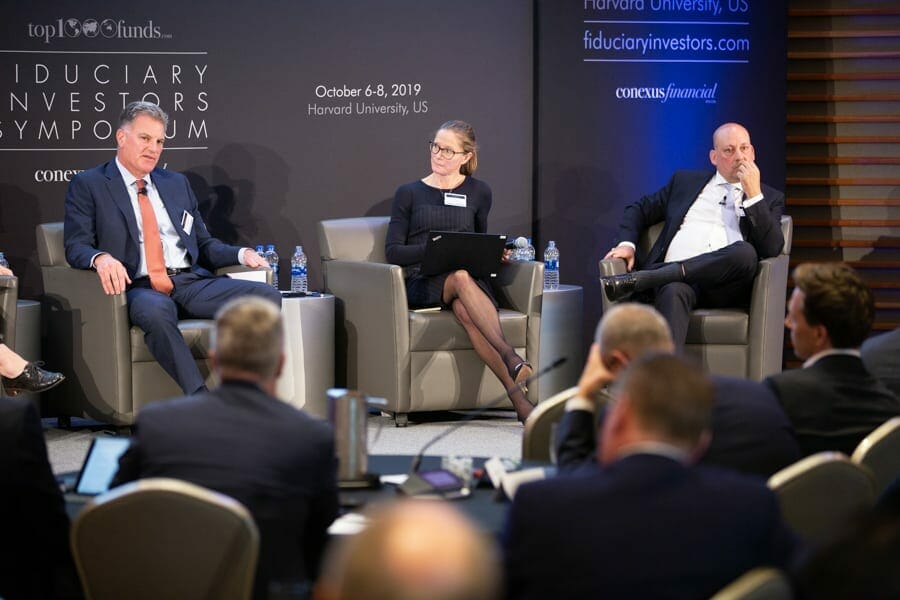 The Public Sector Pension Investment Board of Canada may increase its fixed income holdings, while the Massachusetts Pension Reserves Investment Management Board is weighing whether to internalise some of its investment team.

These are just some of the topics raised in the final session of the Fiduciary Investors Symposium at Harvard University this week. Both pension funds said they want resilient portfolios that can weather all environments.

“I’m focusing on portfolio construction,” Eduard Van Gelderen, chief investment officer of PSP Investments told delegates. So we don’t have “this enormous position in equity-like investments but (instead) have an all-weather type of portfolio.”

Van Gelderen, who has been in the top investment job since August 2018, said the mindset within the C$168 billion pension fund has to change to create a more robust portfolio. He said for the last 10 to 15 years the investment team has been under pressure to deploy capital, but they now need to become more liability aware as members approach retirement.

“We’ve had to speak to all the different asset classes about this,” he said. We’ve had to “convince them that sometimes it’s in the best interest of the total fund not to do an equity-like investment but do more of a fixed income-like investment.”

Michael Trotsky, CIO of the $75 billion Boston-based Mass PRIM, said they have been slowly reducing their equity allocation to 39 per cent of the portfolio versus 50 per cent a few years ago. He said about 6 per cent has been invested in a so-called put spread collar program to help manage volatility.

“We’ve been gradually de-risking the fund based on the longevity of this cycle since the downturn, valuations are getting higher and there is a ton of geopolitical uncertainty,” he said on the panel. “I have to say that politics is what makes me lose sleep.”

About 40 per cent of the fund is invested in alternatives including private equity, private debt, real estate and timberland. They also use hedge funds to help counter their large equity risk premia. While almost all of their assets are managed externally, Trotsky said they make look at bring some capabilities in-house as they do more direct investing.

“We are contemplating internal management,” he said. “In Boston we have access to a great financial workforce. We’ve been able to raise our pay scale enough to attract those kind of people so you will see us do more and more.”

He added that doing more direct investing was a “major thrust” for the pension fund.

“We pioneered direct hedge funds, direct in the sense that we have no fund-of-fund managers,” he said. “We are also contemplating a seating platform and in real estate we are doing more and more direct, it’s easiest for us to go direct.”

Niina Bergring, CIO of the €3.5 billion Veritas Pensionforsakring in Finland, also spoke on the panel. She said all investors, including themselves, need to conduct more research into what the future may look like from a risk and returns perspective.

“Future studies are very difficult,” Bergring said. “We need to have a systems-thinking, multi-disciplinary research group that can go out and research anything that is relevant for our investments over a five, 10, 20-year horizon. That is what we should all be building.”