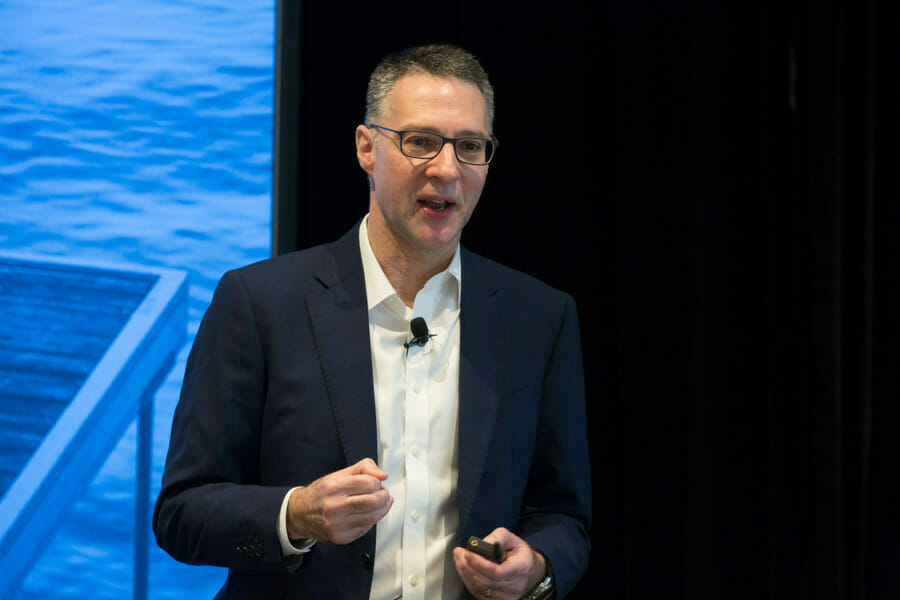 Defined-contribution funds should set default retirement products for members, NEST chief investment officer Mark Fawcett said at a conference. His fund has developed new ideas to do just that.

NEST is the UK’s workplace pension fund set up by the government. It has 6 million members and has developed a blueprint for a default retirement offering to give members assurance and flexibility.

The announcement in the 2014 UK budget that annuities were no longer compulsory was a catalyst for NEST to examine what best-practice retirement income distribution looked like, and to determine the best solution for its members.

“Instead of looking in the mirror to get the answer, as most people do, we surveyed our members,” Fawcett said. “What that revealed is they wanted regular fixed income and protection from stockmarket falls – which is basically an annuity – but they also wanted more. They wanted lump-sum access, pass-on money, and the flexibility to change. So we decided to explore what products might work.”

NEST looked at the fears and behaviours of its members and some issues emerging from a Financial Conduct Authority interim report before it started designing ideas.

What NEST found was that people don’t trust pensions. They would rather take their money out, pay tax and put it into an account that earns negative rates, Fawcett said.

Consumers are also not shopping around or getting advice, and there is little product innovation.

“People like the freedom and choice but they don’t know what to do with it,” he said.

“The conclusion we came to was that members needed a default retirement product. [That way] the only thing they would have to do is call up the fund and say they want to switch to decumulation.”

Ease of use is essential

The fund’s research showed that people with balances as low as ₤10,000 still wanted an income, but it had to be easy for them to set up. The only thing NEST thinks its members should have to do is elect to go into the decumulation phase.

The NEST blueprint has three building blocks: an income drawdown fund; a cash lump-sum fund of 10 per cent, positioned as a rainy day option; and a protection fund for later in life. The building blocks are designed to cover members from their mid-60s through to their 80s and beyond.

The protection fund is contributed to monthly for the first 10 years.

“It’s like taking out an insurance premium with monthly payments, then at age 75 the member buys a deferred annuity, and at age 85 that kicks in, when the income drawdown finishes,” Fawcett explained.

In addition to making products easy to use, he said it was important to use appealing language when communicating with members about retirement.

“We don’t like to say death so we call it the end of retirement! Similarly, people don’t like the word annuity, but they like the idea of insurance and are happy to pay for it,” Fawcett said. “Our aim is to give people something that meets their needs – flexibility in younger years and assurance in older years.”

Fund members were prepared to pay an insurance premium for living longer than they expected.

“They got it and were prepared to pay for it but they didn’t want to use their whole pot,” Fawcett explained. “Overall, they said they’d use about 20 per cent and taking that as a monthly premium, it was easier to swallow.

“The difference between an annuity and what we propose is you have flexibility. If you go into a computer store, it’s only the really geeky people who know exactly what they want. [Most people] just want something that works.”

While the fund has only about ₤2 billion, it is expected to grow to about ₤25 billion in the next five years.

At the moment, contribution rates are 2 per cent, split evenly between employees and employers. These rates are going up to 5 per cent, then 8 per cent, which will be 3 per cent from the employee, 4 per cent the employer and a 1 per cent tax break.

NEST has a cap of 75 basis points, including investment and administration; however, on average, its fees are about 50 basis points, and Fawcett spends much less than that on investments, even with allocations to unlisted property and alternative credit.

“With 6 million members and our assets doubling every year, it’s amazing what deals you can get done with fund managers,” he says.

Mark Fawcett was speaking at the Investment Magazine Post Retirement Conference, on a panel alongside Simon Ellis, global head of client segments from HSBC UK.