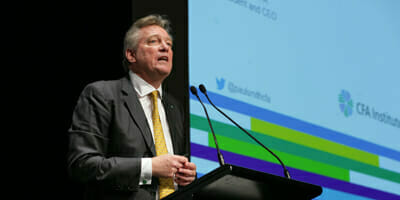 Paul Smith, the Hong Kong based chief executive of the Global CFA Society is on an evangelical mission to change the culture within the investment industry. Not only is he looking to curb the frequency of excess behaviour that leaves the public cynical of high paid finance professionals, but he is a persuasive advocate for change that can lead to improved investment outcomes. At the heart of the problem, he believes, is an industry that is led by people who look like himself – white, middle class, middle-aged – who grew up in a developed world country with access to good education. Unless this demographic changes then reform is less likely: “We are from the same backgrounds, we incentivise them in the same way and yet we are expecting different outcomes,” he says.

Smith is informed by perspectives gained from working in China, where  savings are more crucial to lives owing to a less generous welfare system and the outcomes more precarious owing to less established financial providers and products. It has given him a stronger sense of the importance of customer outcomes.

“In the developed world you lose our moorings. It is a very self centred industry that focuses on itself, where a lot of financial activity is not geared towards any economic end and where organisations have forgotten what they are in the business to do, which is to serve the clients,” he says.

One of the more surprising comments uttered by Smith is his bluntness that the finance industry should not focus on profit maximisation; his point being that the client’s needs should come first, not the needs of those investing on behalf of the clients.

“We are stewards of other people’s wealth, we should not think of our end client as someone we can make money out of, we should think of ourselves as a fiduciary and a steward of their interests and of someone who is trying to deliver a professional service to them,” he says. “If we cannot prove ourselves to be professionally orientated then I fear that regulation comes in to take up the slack because government realises that what we do is important that we are our fiduciaries of other people’s money.”

The dangers of not acting are already visible, he says, in the way individuals are already bypassing traditional finance products and services to buy property, ETFs or to use robo-advice, but he admits, the challenge will be hard. “I think our industry has the head in sands when it comes to that,” he says.

He advocates the finance industry focusing around the idea of selling a service with an outcome, similar to goals of the medical profession and that this should be done honestly and transparently.

“To help people help accomplish their retirement goals I should not be making fees from burying things in those products that you do not know about,” he says.

Another step on this change in mindset is reengineering incentives. He would like to see companies explore the idea of giving incentives for ethical behaviour, rather than just meeting or exceeding financial targets.

To achieve such outcomes, the CFA wants its members to be agents for change within their companies, rather than just to see their qualification as simply a path to a good career. For this the CFA has developed a set of ethical frameworks for its members to apply in their workplaces and has urged its members to do such acts on a voluntary basis, rather than for payment.

“Members should ask ‘how do I make the business I am working in to be a better steward of people’s money’ and ‘how can we use the tools to transform the ethical culture within our business’,” he says.

Smith see greater gender and ethnic diversity as central to this change. For this the CFA has undertaken research on how the recruitment processes is structured, from the way adverts are written for jobs, the way interviews are conducted and the criteria used for promotion. One finding is that men are far more likely to apply for a job for which they do not meet all the stated criteria than women.

“Greater gender diversity is good for the member outcome, because the more rounded the team that is thinking about the investment problems the more likely you are to get a solution,” he says. “It is not about women being more or less risk takers, but if you put people of different backgrounds together they are likely to come up with a better decision, than if you have five people who all look the same and think the same.”

Smith also draws parallels with the last financial crisis and the look of those running the industry. “If we want to change the outputs we have to change the inputs. If we continue to hire pale, male and stale then you are going to get the same results.”