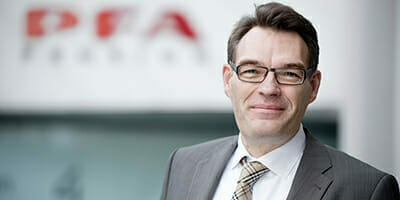 Danish pension investor PFA is continuing a switch out of European government bonds in favor of global equities, but has begun reinvesting in Europe’s southern periphery.

DKK-350-billion ($63-billion) PFA announced a $900 million purchase of equities in April, commenting at the time that the crisis in Cyprus had increased the risk to its European bond portfolio.

Henrik Henriksen, PFA’s chief strategist, reflects that “you could say moving out of European bonds for equities been working well as typical European bond investors have lost money this year”.

Henriksen says the switch is ongoing despite some unease about high equity prices – with US equity prices increasing more than 20 per cent so far in 2013.

“You need to be prepared for some kind of reaction especially if growth news disappoints,” cautions Henriksen, adding “we also have to be aware that some of the equity value increase has been liquidity driven, and if the Fed were to withdraw that for the wrong reasons, there could be a real blow.”

“We have to see the US economy pick up next year if the upturn in equities is going to be supported.”

He argues that should a withdrawal of monetary stimulus be made to avert a bubble before underlying economic strength returns, there will be a fallout impacting high-risk assets on the whole.

Henriksen explains that PFA’s sale of European bonds has taken place across its core portfolio. At the same time, PFA has exhibited renewed faith in the continent’s periphery adding to its holdings in Spain and Italy “in order to get a better carry with a decent risk/reward”.

Henriksen agrees that PFA has a more positive view on the Euro, although he jokes this is somewhat inevitable as “last year you were wondering whether the whole thing would collapse.”

The support of European politicians and the ECB for the currency has “reduced distrust, even if you can’t really say trust has been increased” in Henriksen’s view.

PFA has extended its renewed confidence in Europe to its equity weightings – going overweight on European equities along with US shares.

The Danish fund remains neutral on Japan, with Henriksen saying “we can’t figure out yet if the third arrow is going to fly” – in a reference to Prime Minister’s Shinzo Abe’s planned structural reforms.

While PFA’s cornerstone guaranteed product remains bond-dominated due to its tough solvency requirements, the investor is expressing much of its enthusiasm for equities in the approximately DKK-50-billion ($9-billion) ‘market-based’ product. The rapidly growing defined-contribution offering has a near 50/50 split between bonds and equities.

Despite its clear global investment horizon, PFA’s Danish equity returns have been particular strong in recent years. Henriksen explains that one reason for this is that the fund is happy to take clear positions on companies listed on the Copenhagen exchange.

Despite underperforming relative to their benchmark this year, returns of more than 20 per cent on Danish equities have still exceeded the gains from global shares. Liquidity needs have led PFA to shift somewhat away from its traditional preference for Danish equities, however – at least in the traditional guaranteed fund.

Like many global funds, PFA is in the process of increasing its alternative-asset allocation. A recent drive started with an increase ub the share of real estate assets in the market-based portfolio from 5 to 10 per cent, with an increase also planned for the guaranteed product’s relatively smaller real estate bucket.

PFA is looking to expand its real estate exposure internationally, in order to gain added diversification. It has been exploring the London and Hamburg markets with Henriksen saying it is browsing on a “case by case” basis to avoid possible overvaluations in these core markets.

Henriksen is enthusiastic on the potential of wind power, saying “the return possibilities are better than they were a few years ago. If we lever it up we should be able to get double-digit returns from this investment.”

PFA has since made a 2 per cent stake in Danish government-owned Dong. Henriksen says PFA is considering further private equity and infrastructure investments – both directly and via funds. He is confident that the associate illiquidity risk can be controlled by the fund’s selective approach and long investment horizon, allowing PFA to reap good yields from its burgeoning alternative adventures.

PFA fears that its ambitions in illiquid assets could potentially be halted in their tracks by the onset of Europe’s Solvency II regulations.

The investment strategy of PFA’s guaranteed offering will “certainly be affected” by the regulations, says Henriksen, with work to set the portfolio up for the new regulatory regime ongoing.

Relatively opaque and illiquid assets like infrastructure are set to be penalised under the regulations, meaning that “infrastructure investing could be very expensive and politicians might get less from pension investors than they hoped for.”

Other asset classes should benefit though from the new European solvency formula adds Henriksen, with investment grade credit likely to look particularly appealing.

PFA’s capital adequacy ratio was as high as 224 per cent at the end of June 2013 indicating a healthy funding state.  That is no cause to relax though says Henriksen as “a thing that’s working against us is that Danes are getting older”.

PFA’s larger guaranteed portfolio suffered an investment loss of 2.2 per cent in the first half of 2013. This was largely due to rising interest rates and a loss from hedging against further interest rate drops, says Henriksen.

“The best thing we can hope for is a slow and steady climb in interest rates rather than anything too abrupt, but things have improved somewhat in the second half of 2013,” explains Henriksen.

As a large investor in socially conscious Scandinavia, it is no surprise that PFA takes its responsible investing credentials seriously.

It went further than most though in drawing up guidelines on its government bond investments in 2012.  A small number of investments in Ivory Coast sovereign bonds were sold as a result.

While efforts to increase alternative assets will remain a focus, Henriksen is happy that PFA’s investment strategy is robust – something he feels is helped by the high level of competition among Danish pension investors.

“You have to make sure your strategy is good at all times and you really have to justify expensive investments”, he says.