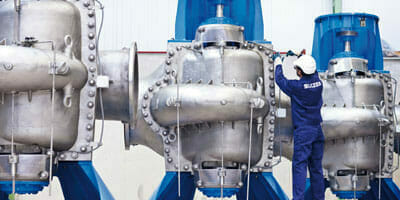 Sulzer is a Swiss manufacturer with a proud past. From pioneering the diesel engine to making the specialist pumps that drive power production around the world, it has been around for 178 years.

Perhaps leveraging off such a rich history, the company’s pension scheme is very much looking into the future thanks to solid returns so far in 2012.

The 3.6-billion Swiss franc ($3.8-billion) Sulzer Vorsorgeeinrichtung has seen returns of 6.1 per cent up until the end of October, almost a full percentage point over the fund’s benchmark.

Dr Urs Schaffner, who heads the fund, says the good showing is the result of intelligent investment picks by the inhouse investors, who manage 90 per cent of bond and equity assets.

Schaffner says he is “positively surprised. Investing in an interest-rate safe haven like Switzerland and assuming normal risk premiums, our expected returns for the next few years amount to between an annual 2 and 3 per cent.

“Given this expectation, combined with the many risk factors currently connected with the US and European debt situation, we hadn’t expected performance to be so good.”

Schaffner explains that the Sulzer Vorsorgeeinrichtung has also been able to navigate the European sovereign debt crisis well.

The fund withdrew from peripheral bond holdings before their yields spiked and has acted quickly to shed poorly or even negatively returning safe-haven government bonds in favor of corporate debt.

While picking winners within asset classes seems to be paying off, Schaffner says the investment strategy on the whole at Sulzer Vorsorgeeinrichtung has been defined by continuity.

The fund has a conservative investment mix principally because a large proportion of its members are claiming benefits.

Some 70 per cent of the liabilities are linked to pensioners as a consequence of major restructuring at the sponsoring company in the 1990s.

This leads to a “rather rigid investment risk budgeting process” says Schaffner, with the risk appetite staying on the conservative side for a good number of years.

A declining pensioner pool may see some change for this in the years ahead.

For its beta, Schaffner explains that the fund has established target allocations in each asset class, and a bandwidth allocation range designed to avoid over or underexposure.

The bandwidths and target allocations were designed with the help of a consultancy, PPC Metrics, which completes an asset and liability study for the fund every three years.

Choosing where to pitch the asset allocation within that bandwidth is where alpha can be won or lost.

In 2011 the Sulzer fund made the wrong call in underweighting domestic bonds, going for a 29-per-cent holding, with the long-term target being 35 per cent.

This saw the fund miss out a little on a debt boom and miss its benchmark that year.

Schaffner explains that the fund has gone for fairly narrow bandwidths “to limit the alpha risk” but at the same time ensured they are wide enough “to allow the flexibility needed to absorb some natural market fluctuation”.

For instance, the domestic bond holdings are currently permitted to fluctuate between 27 and 40 per cent, while domestic equity is limited to 5 to 7 per cent.

Overall bond holdings at the fund are now at 48 per cent after recent increases, with equities making up 21 per cent.

Those equity holdings are outsized by a 23-per-cent stake in real estate – not an unusual amount in Switzerland and a reinforcement of the fund’s conservative outlook.

Real estate continues to perform well for Sulzer Vorsorgeeinrichtung, with indirect real estate allocations increasing by over 7 per cent in the first nine months of 2012.

The 4-per-cent alternatives holding is divided down the middle between private equity and commodity investments.

Schaffner says the conservative identity of the fund is reinforced by its avoidance of “complicated instruments”, such as structured products.

Hedge funds are no longer in the portfolio, with Schaffner saying that the fund’s investment committee “lacks confidence” in the ability of hedge funds to perform over the next few years. He adds that “hedge funds really are tactical investments rather than the strategic investments we are looking for”.

Emerging market bonds and infrastructure are asset classes that the Sulzer fund has an interest in acquiring, with others also on the ‘watch list’.

Schaffner says that even though these are being evaluated, “it will take a long time to work these through to the investment strategy”.

Discussions between the fund’s investment team, investment committee and management board are usually protracted when concerning a significant new investment venture.

Entering into new asset classes would also change the risk dynamics that the fund prioritises and likely require adjustments in existing asset classes.

No room for complacency

Funding is good at Sulzer Vorsorgeeinrichtung, with a $214-million surplus on the accounts at the end of 2011.

Schaffner says this “does not take any pressure off investment at all”.

“You just need to look at the numbers behind that to see that there is no room for complacency”, he suggests, indicating that the official discount rate in Switzerland inflates funding ratios.

The Swiss discount rate for pensions is 3 per cent, significantly higher than a 10-year government bond yield of 0.4 per cent.

The fund is aiming for a 17-per-cent surplus, which equates to around $636 million at the fund’s current size.

As the benefit level of the Sulzer fund exceeds the legally required minimum contributions considerably, it has a release valve in the form of its hybrid status.

Thus, it aims – but does not guarantee – to credit the legal minimum interest rate to the retirement savings of all active members.

Anything beyond that is usually the subject of intense negotiation.