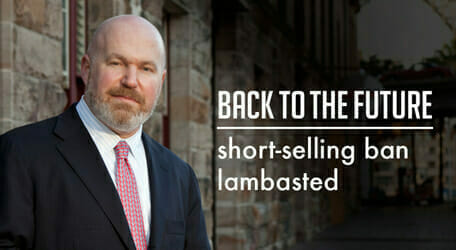 Cliff Asness must be a very stressed man. Not only has he been “mad as hell” for nearly three years (or is it mad again?) but also the reprise in responses by regulators around the globe to market crises, namely banning short selling, means he doesn’t have to write any original words in response.

The managing and founding principal of AQR joins an abundance of criticism regarding the ban on short selling in France, Belgium, Italy, and Spain.

Asness’ prophesises his views via his “Stumbling on the Truth” blog, and in response to the recent ban on short selling in Europe, described the ban as “stupider this time than last”.

In September 2008 an opinion piece by Asness, in The NY Times blog, Executive Suite, described the US ban on short selling of financials as a response by “foolish bureaucrats who are making scapegoats out of others and damaging our economy in a misdirected effort to solve a problem the government, to a large extent, caused”.

While not denying the magnitude of the crisis, or that a response was needed, he went on to say that the response “should not be to close down free-market capitalism and punish the wrong people”.

“The government’s actions here will unambiguously hurt our capital markets and economy long-term.”

Asness argues the ban is “stupider” this time because studies of the 2008 ban revealed “strong, direct empirical evidence that banning short-selling of European financial institutions during market crises does not make their stock prices go up and has significant bad consequences”.

EDHEC says these decisions fly in the face of empirical evidence, and academic studies have documented the positive contribution of short-sellers to market efficiency and show that constraining short sales significantly reduces market quality, by reducing liquidity and increasing volatility.

The graph below shows the effect a ban on short selling had on Pakistan’s Karachi SE-100 Index.

There is an argument that banning short selling is buying time. And the EDHEC-Risk Institute, headquartered in France, describes short selling bans as a “political smokescreen that is likely to be counterproductive, both directly by disrupting market functioning and degrading market quality at a most testing time”.

It also says there is an indirect effect by “fuelling defiance vis-à-vis sovereign states and the continued inability of their political institutions to address the causes of the current crisis”.

“At the rate the world is going I’m never going to have to write anything new again,” Asness says. The repercussions of which, are not worth investigating.

Which shorts are informed?