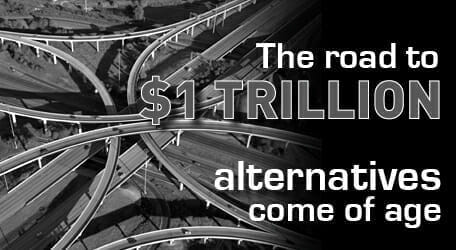 Pension funds have invested nearly $1 trillion in alternative assets with the world’s largest managers, with total investments in the asset growing by 12 per cent last year, research has revealed.

The Towers Watson research showed that half of the more than $952 billion of assets under management were now pension fund assets, with real estate dominating as the most popular way of gaining exposure to alternatives.

“According to our research, allocations to alternative assets have continued to rise and now account for 19 per cent of all pension fund assets globally, up from 5 per cent fifteen years ago.”

The research also looked at the top 100 alternatives managers and found that real estate made up 55 per cent (up from 52 per cent) of assets under management, private equity fund of funds (PEFoF) accounted for 18 per cent (down from 21 per cent in 2009).

The broader survey, which looked at 271 investment managers found that North America still had the biggest slice of investments in alternative assets (46 per cent). But that its popularity as a destination for alternative investment was waning, with its proportion of total of assets under management slipping 5 per cent from 2009.

Europe’s share of investment increased from 35 per cent in 2009 to 37 per cent last year, while Asia Pacific also grew from 9 per cent to 13 per cent of investment.

Baker said he expected the drive to diversify would continue, particularly in light of recent volatility on equity markets.

“The case for diversity has been thoroughly tested recently, but those investors that have diversified away from simply holding equities as their main growth asset in the last five years generally performed better than those that hadn’t,” he said.

“Given the ongoing economic uncertainty it is likely diversity will become even more important in the future.”

In terms of the leading managers within particular alternative asset classes, HarbourVest Partners were the leading (PEFoF) with $21 billion of assets under management. Blackstone Alternative Asset Management managed the largest proportion of FOHF assets on behalf of pension funds with a total of $15.9 billion.

Prudential and Macquarie were the leading managers in Real Estate and Infrastructure respectively.

PIMCO retained its position as the leading pension fund commodities manager with $11.1 billion of assets under management.