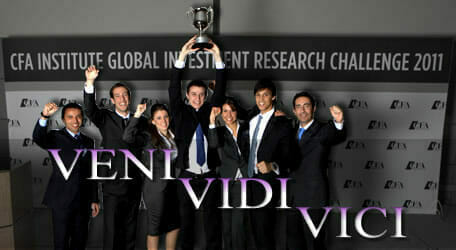 The team of five (pictured) from Italy’s Politecnico di Milano were all studying for the Master of Science in Management, Economics and Industrial Engineering, and took part in the fifth annual competition which took place over a year.

Team leader Nicolo Rolando said the competition was a “long and tough experience” and had been the team’s “top priority” for the past five months. “The result has been well worth it,” he said, “and we’ve learned a lot. We’ve also realised that there is still much more to be learned.”

The other team members were Anna Belli, Francesca Maria Claudio, Giacomo Saibene and Stefano Vigano. Their winning entry was a report on Piaggio & C SpA (PIA:IM) to a panel of industry experts.

The Piaggio Group manufactures scooters, mopeds and motorcycles from 50 to 1,200 cc marketed under the Piaggio, Vespa, Gilera, Aprilia, Moto Guzzi, Derbi and Scarabeo brands. The group also operates in the three- and four-wheeled light transport sector with its Ape, Porter and Quargo ranges of commercial vehicles.

Over the year of the challenge, more than 100 CFA Institute member societies worldwide hosted local competitions in which students had to analyse public companies while being mentored by professional research analysts, write research reports, and then present – and defend – their reports and recommendations to a high-profile panel of experts.