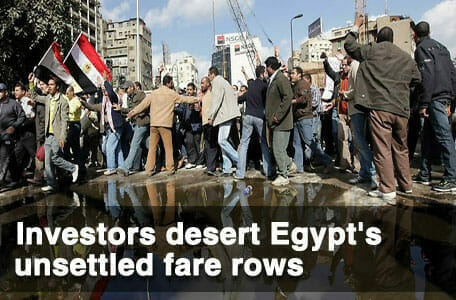 Civil unrest in Egypt, in particular, and other Middle-eastern and some African countries has been blamed for causing further investor outflows from emerging markets in recent weeks.

Figures from Boston-based fund data research firm EPFR Global show that the trend for investors withdrawing from global and regional emerging markets funds, which began in the December quarter, accelerated as the Egyptian crisis unfolded in January.

EPFR surveys more than 100 global emerging markets mutual funds on a weekly basis. Those funds had their highest level of net outflows – $4.5 billion – in the week ended February 2. Regional funds, including more than 100 Asia ex-Japan funds, China and BRIC funds, also continued to have outflows. This is seen as further profit-taking from last year’s gains.

The report says the rotation out of emerging markets by mutual fund investors – largely high-net-worth individuals and smaller institutions – started in the fourth quarter last year and accelerated in late January against the backdrop of unrest in Egypt, Tunisia, other Middle-eastern and some African countries.